Marine navigation was an integral part of daily life in the historic coastal town of Southampton. The Imperial Tower on Chantry Island warned ships of the surrounding dangers, while 4 smaller Range Lights guided mariners safely into the harbour. Built in 1903, the front and back range lights on the Saugeen River were lined up by sailors entering the harbour, helping to stay on course until the river channel. The other two range lights guided mariners through the ‘gap’ in the Long Dock and into the Harbour of Refuge.

In the 1800s, the front light at the river’s mouth was originally a lantern attached to a mast, fastened to a crib about 50′ from the outer deck of the pier. It was later replaced by a square tapered wooden building, painted white with a red top. Electrically operated, it is mounted on the end of the pier and is unmanned. A working fog horn adds a soulful, romantic touch to foggy shoreline weather. At one time, the automated fog horn came on whenever fog rolled in from the Lake. Today, it is operated by boaters with a signal from their marine radios.

The back range light started its life as a green lantern raised up 45′ above the water on a tall mast. It hung on the land opposite to the present location of Saugeen River Light. It was replaced the same year as the front range light, and constructed in a similar fashion. It sits upriver, about 2,300 feet from its sister light, just past the bridge. It is a small structure, standing only 31′ high, but because of its hill location, it sits 61′ above water level. Its fixed automated light is electrically powered. 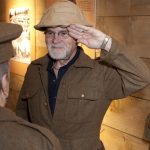 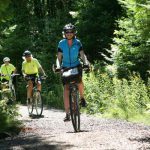 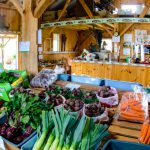 Fall in love with Bruce County at local farmers markets